Last week we talked about the numbers by the week. This week we show the total numbers by the species of ducks of the 2010-2011 season. It was a great season this year. I heard a lot of grumblings from other duck hunters around the area about how dry it was, but I am not gonna complain about it being dry. I lost a lot of flooded timber I usually hunt due to it being so dry. The reason I like a dry year so much though is I believe it concentrates the ducks in the holes you do have and that far outweighs having a few extra timber holes to hunt. I have heard other hunters say that ducks pass the Mississippi Delta and its low water conditions in a dry year for the LA. Marsh, but from my numbers I have better years in normal to dry conditions. On average this year, It was a cold year compared to other years. We recieved three snows which is unusual for the Mississippi Region. With all that being said, lets look at the numbers: 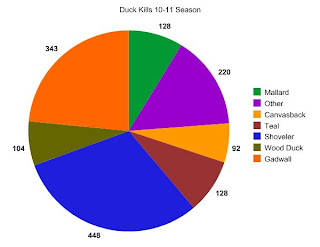 As you can see the spoonbills were plentiful this year due to the low water conditions and concentrating them in the catfish ponds and flooded fields we hunt. The mallards we shot were both in the field and in the flooded timber holes we hunted. Gadwall was one of the the main ducks we killed this year. The gadwall hunts we had this year was almost like the gadwall hunts of 10-15 years ago. What I mean by this is when they came in they flooded in. Sometimes it was amazing even for me to see and I have been on some of the best flooded timber hunts ever. Teal numbers were right on where they usually are. Canvasback numbers were through the roof. I don't know where all these canvasbacks came from. It was the most I had ever seen. The last two seasons the canvasbacks have been very plentiful though. Wood ducks were also were concentrated in the few holes they had left to sit on with most brakes and flooded timber holes dry. Other ducks consist of bluebills, hooded meganzers, ruddy ducks, and ringnecks. When Ducks Unlimited released their numbers and said the bluebill hatch was up this year, I said yeah I have heard that before. They were right on because it was the most I had seen in five years. So as you can see the variety was there in the numbers we killed. I think this is what makes us here at Mossy Island Outfitters so unique. When you hunt with us you may come back with five different ducks in a six duck limit. If hunts like this interest you please visit our website at http://www.mossyislandoutfitters.com/ or call us at 1-877-699-6677 or my cell at 662-392-4740.

http://www.mossyislandoutfitters.com
Posted by Rocky Leflore at 10:47 AM